George Floyd drew his final breath on Monday, May 25, in the presence of concerned bystanders. The 46 year-old black man was arrested by Minneapolis police officers who responded to a call from a shopkeeper about someone trying to pass a potentially counterfeit bill.

Police arrived and pulled Floyd out of his vehicle and cuffed his hands behind his back. This is where bystanders enter the picture. The cell phone video of the moments leading to Floyd’s death is disturbing.

Four police officers used restraint on an unarmed and handcuffed man that was beyond anything reasonable. Floyd lay face down on the street, in obvious pain and distress, while police officers held him down. One officer in particular placed his knee and the weight of his body on Floyd’s neck.

The cell phone video recorded Floyd repeatedly saying, “I can’t breathe.” Bystanders called out to the officers to show restraint. Their calls fell on deaf ears. The officer with his knee on Floyd’s neck never backed off. Seven minutes later, Floyd said, “I am about to die.”

And then, George Floyd drew his final breath and died. A person nearby remarked, “They just killed him.”

Floyd had moved to Minneapolis from Houston’s Third Ward in search of work and a better life. I have spent lots of time in that part of Houston over the past fifteen years. I have friends in the Third Ward who knew Floyd — and liked him.

Many who personally knew Floyd in Minneapolis also liked him and spoke kindly about this man they regarded as a gentle giant.

What disturbs me most about the video is the unwillingness of the police officer to give Floyd the benefit of the doubt when he cried out repeatedly that he could not breathe. While Floyd’s protests moved bystanders to desperately plead on his behalf, the officer remained stoic and unresponsive, making it increasingly difficult for Floyd to breathe.

Floyd’s cry is a metaphor for what racism, violence, and an unwillingness to give a hurting human being the benefit of the doubt can do.

These are things that suffocate people and make it difficult for them to breathe. And a foot or a knee on the neck of another is the ultimate expression of exercising power over those who can do little to help themselves.

What happened to Floyd should disturb us all in a profound way. When we allow racism, violence, and disregard for the sanctity of human life to have a place in our hearts, we become guilty of choking the life out of others — just like the officers responsible for Floyd’s death. And when we tolerate these things in our society, sooner or later it will become difficult for us to breathe.

God hates racism and violence and attitudes that disparage others. As a Christ-follower, I must not and will not tolerate what God hates. I want to see others as Christ sees them — as members of the same human race and those who are equally valuable in the eyes of God.

I want for my actions to breathe life into others rather than make it difficult for them to breathe.

In the words of Martin Luther King, Jr, “The arc of the moral universe is long, but it bends toward justice.” May justice indeed be served in regard to the senseless death of George Floyd. 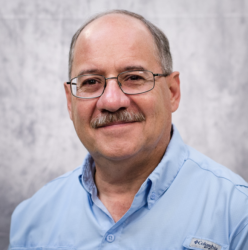 Omar Garcia
Omar serves as Kingsland’s missions pastor and mobilizes upwards of 3,000 volunteers annually to serve in domestic and international initiatives. Omar and his wife Cheryl have three children and two beautiful granddaughters. When Omar is not traveling the world he enjoys spending time with Cheryl at their off-grid cabin in Big Bend, hiking, mountain biking, and canoeing. He writes about life, faith, and adventure at GoBeyond.blog and about his Texas adventures at ExploreTexas.blog.

Latest posts by Omar Garcia (see all)
BACK