5 Tips for Connecting with Your Teen

I am by no means an expert on raising teenagers, but I have two—almost three—of my own, I’ve led teen core groups and Senior Life Groups, photographed numerous high school seniors, and spent time with my teens’ friends over the years, so I’ve learned a trick or two about finding ways to connect with them.

While most parents assume their teens would rather spend all day in their bedrooms alone, that’s honestly not what they want at all. They want to connect, and they want to connect with you, their parents! Over the years, I can’t count how many times I’ve heard teens express how they’d love to have a better relationship with their parents, so here are five practical tips for connecting with the teenagers in your life.

I asked my 17-year-old son for feedback on this one, since it seems there’s a greater disconnect between teen boys and their parents vs. girls and theirs. When I asked him why it is easy for the two of us to speak freely to one another, his answer was simple: relatability. He said, “I like that you don’t act like other adults your age. You try to keep up with us, so that you understand the way we talk and joke, so it makes it easier to be able to talk to you.” He also said that while I keep up with their language, I’m not a parent trying to be hip or cool.  It just makes it easier for him to approach me knowing I won’t get angry about the words he uses to communicate. The other thing he mentioned was that he knows I won’t judge him or “freak out” when he’s made a mistake or needs to talk to me about something uncomfortable. He knows he can come to me about anything, without the fear I’m going to lose my mind over it. (Full disclosure: There have been incidents when I have been extremely close to losing my mind, but I’ve done a really good job at keeping my composure, thanks to my super cool-as-a-cucumber husband! You can do it, too!)

2. Meet them where they’re at.

Just like us, your teenagers have their own hobbies and interests.  Meet your teens where they’re at and find out what they’re into. If they like playing guitar, ask them to let you hear something they’ve learned to play. If they like making TikToks, hold the phone while they make one, or even better, join in if they ask you to be in one! Do you know what an honor that is since they’re sharing it with their peers? If they’re readers, ask them what they’ve been reading lately and what books they loved, and why. Listen to the bands they’ve been listening to, even if it’s not your cup of tea. The fact is, they’ll let you into their world, if you seem genuinely interested. For example, my preteen loves board games, so the other night, I sat and played two different games with him. He prefers one-on-one time with me so another thing we’ll do together is snuggle up and watch military TV shows or movies, since that’s his favorite genre.

Find your teen’s safe space to talk. This one is huge! My daughter, a sophomore, loves to ride in the car and talk. She puts on her playlist and that’s when she feels most comfortable sharing about her life and being most vulnerable. There have even been occasions where we’ve gotten into the garage and sat in the car for over an hour to continue our conversation. The one thing I’ve learned most from her is not to rush but be patient and give her my undivided attention.  I think it’s easier in the car because she doesn’t have to compete with the other distractions once we get in the house. My oldest son, a senior, likes to talk in my bedroom. He will sit by the window for as long as he’s willing, talking about school, his friends, girls, his concerns, or simply playing a new song he’s learned on his guitar. On the very rare occasion he’s asked me for a bedtime hug, I’ve learned that’s my cue there’s something on his mind, and I’ll stay in his room to talk. He asks me to close the door and that’s when he feels safe opening up about what’s bothering him. Never force them to talk, unless the timing is right and it’s in an area they feel comfortable sharing.

The worst thing a parent can do is try to talk to a teenager when the timing isn’t right. My oldest son is not a night owl, so there’s no sense in me trying to start a conversation with him right before he heads to bed. He’s had a long day at school, spent hours on homework, he’s probably used all his words for the day, and is both grumpy and tired. Why would I want to talk to him under these conditions? I’ve learned from experience that the best time to chat with him is early in the morning or right after he gets home from school. My youngest son and daughter, on the other hand, are my night owls! They get extremely chatty after 10 pm, especially if it’s the weekend and they’re able to sleep in the next morning. I have been known to stay up as late as 3am just to get a glimpse into their worlds.  We’ve danced together, made TikToks together and shared a lot of laughter during these late nights. It was totally worth it because I know we’ll cherish these memories forever.

5. Make the most of every moment.

During this quarantine, we have a lot of time to spend with our families. Don’t waste it! Some people may feel it’s a punishment to be cooped up inside, but I feel like it’s such a blessing and opportunity to reconnect! Most families spend more hours a week at work or school than they do with one another. This means the influences outside our homes can easily have more power than what’s said or done inside our homes. Let’s make sure our home is their number one lifeline for information, love and security. You only have one opportunity to raise them before they’re on their own, so savor each moment you have with them! 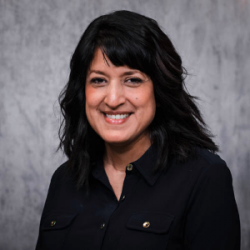 Rita Ramirez
Rita is passionate about leading teens and young adults and has volunteered in youth ministry over the past 7 years.She serves as the Adult Discipleship Ministry Assistant at Kingsland Baptist Church in Katy, TX.Rita is married to her college sweetheart, JR, and is a mother of two teens and one preteen-Adrian, Avery and Avi.

Latest posts by Rita Ramirez (see all)
BACK