Is your Marriage a Contract or Covenant?

How to Win at Marriage (Part 1)

A man told his wife one day that he had not been feeling well. So, they went to a doctor and ended up getting some tests run. The doctor ran the tests and while the man was in recovery, the doctor went to the waiting room to see the wife. The doctor said, “Your husband has a rare disease. What he is going to need in the days ahead is unconditional love, lots of TLC, and steady presence and compassion from you.”

A little while later, the husband began coming out of his anesthesia and saw his wife sitting there. He said to his wife, “Honey, what did the doctor say?”

Marriage is a challenging journey, isn’t it? In many ways, it’s a beautiful mystery. In other ways, it’s humbling, as it exposes so many weaknesses in us.

Jesus had some very pointed things to say about marriage, and they weren’t always easy to hear. But when we spend time seeking to understand his words, and we appreciate where he is coming from, we see a pathway we can take to win at marriage.

Let’s look at what Jesus said in Matthew 5:31-32.  It states, “It was also said, ‘Whoever divorces his wife, let him give her a certificate of divorce.’ 32 But I say to you that everyone who divorces his wife, except on the ground of sexual immorality, makes her commit adultery, and whoever marries a divorced woman commits adultery.”

This is the third of Jesus’ antithesis statements in Jesus’ Sermon on the Mount. These statements go something like this: “You have heard that it was said…I say to you…” In these antithesis statements, Jesus is shining a light on the common understanding and teaching of that day, and from there, taking his hearer to God’s heart on what was originally intended.  When you simply look at these two verses, it seems that Jesus is simply talking about divorce and who is allowed to divorce and why you may get a divorce.

It is interesting that in Matthew’s gospel that we see these words again from Jesus when Jesus is asked about divorce in Matthew 19:3-9.  It states, “And Pharisees came up to him and tested him by asking, “Is it lawful to divorce one’s wife for any cause?” 4 He answered, “Have you not read that he who created them from the beginning made them male and female, 5 and said, ‘Therefore a man shall leave his father and his mother and hold fast to his wife, and the two shall become one flesh’? 6 So they are no longer two but one flesh. What therefore God has joined together, let not man separate.” 7 They said to him, “Why then did Moses command one to give a certificate of divorce and to send her away?” 8 He said to them, “Because of your hardness of heart Moses allowed you to divorce your wives, but from the beginning it was not so. 9 And I say to you: whoever divorces his wife, except for sexual immorality, and marries another, commits adultery.”

Now, I’m about to get a little technical here.  This will help us understand how Jesus is addressing the common understanding around marriage and divorce.  In Jesus’ day, there were two schools of thoughts, literally, when it came to teaching on marriage and divorce.  These two popular views came from two Rabbis, Hillel and Shammai, who were famous first-century Jewish scholars. It’s interesting how one had what we might consider a liberal view of divorce and the other was much more conservative. Hillel interpreted Moses’ allowance for divorce for almost any reason. Shammai, on the other hand, took a much stricter view and said Moses was speaking only about sexual sin.

These were the most prevalent interpretations on the topic.  So, no matter how Jesus answered the Pharisees, he was going to offend somebody.

What Jesus does, though in his response here, is take us back to the Garden of Eden.  Instead of stopping to deal with Moses’ interpretation of things, Jesus takes us back to God’s original intent for marriage.

Notice again, these words in Matthew 19:8, He said to them, “Because of your hardness of heart Moses allowed you to divorce your wives, but from the beginning it was not so.”

What is Jesus saying here?  He is saying that somewhere along the way, something changed.  Originally, there was a covenant…that is what marriage was in the beginning.  But now, you view it as a contract, and you act as a consumer.

Wamdi Wicasa says, “A contract is an agreement made in suspicion.  The parties do not trust each other, and they set limits to their own responsibility.”

And the language of the contract is always stressed.

Wicasa also says, “A covenant is an agreement made in trust.  The parties love each other and put no limits on their own responsibility.”

If you are a consumer, coming to your marriage as if it is a contract versus a covenant, it is likely that when you come to a place of trouble, you will likely take the out. But if you understand that God sees marriage as a covenant, broken honorably in his sight only by death, then you can choose a pathway to a life-giving marriage.

To understand the covenant approach to marriage, the way you win at marriage, look at Ephesians 5:25-31.  It states, “25 Husbands, love your wives, as Christ loved the church and gave himself up for her, 26 that he might sanctify her, having cleansed her by the washing of water with the word, 27 so that he might present the church to himself in splendor, without spot or wrinkle or any such thing, that she might be holy and without blemish. 28 In the same way husbands should love their wives as their own bodies. He who loves his wife loves himself. 29 For no one ever hated his own flesh, but nourishes and cherishes it, just as Christ does the church, 30 because we are members of his body. 31 ‘Therefore a man shall leave his father and mother and hold fast to his wife, and the two shall become one flesh.’”

In a Contract Relationship, the relationship lasts as long as the other party is meeting your needs at a cost that is acceptable to you. If one party breaks their end of the deal, then you go look for another who can deliver what you need.

Many people mistake this type of relationship for love because of the feelings and emotions it invokes, especially in the early, romantic stage of the relationship.

A Covenant Relationship is different. It is a binding agreement between two parties. In ancient Israel, a covenant was often sealed with cutting an animal in half. The parties would then walk between the halves, through the blood, to signify the oath they were taking. It was the most serious of promises because a death was involved.

Many people mistake this type of relationship as duty because of the description and many argue that there is no passion or excitement in what appears to be such an antiquated definition of a relationship.  Yet one of our problems is that our culture defines love as a response to a spontaneous desire, not a response to a legal oath or promise.

You see, modern thought does not see duty and passion as compatible.  But the bible does not draw such hard boundaries – that you are either in a dutiful relationship out of obligation or in a passionate relationship of spontaneous desire.

The Bible describes the marriage relationship as a covenant and it is, as Tim Keller states, “A stunning blend of law and love.”

In this covenant, a death is involved. That is why Paul says that marriage is about laying your life down for the sake of the other, just as Christ laid down his life for us. Paul knew of our tendency to claim covenant yet act like consumers and that becomes the core problem.

The Bible teaches that the essence of marriage is a sacrificial commitment to the good of the other. That means that love is more fundamentally action than emotion. Tim Keller, in his book The Meaning of Marriage, says, “When the Bible speaks of love, it measures it primarily not by how much you want to receive but by how much you are willing to give of yourself.”

Before you go any further, take some time to reflect on how you are approaching marriage.

Here are a few questions for reflection:

Here’s a way I like to put it: If you will love and serve your spouse more than you do yourself, you will do your part in making your marriage great. If you both do it, watch out! 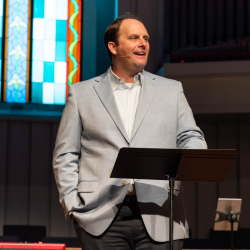 Roger Patterson
Roger Patterson is the senior pastor of West University Baptist & Crosspoint Church and is the leader of the CityRise Network in the heart of Houston, Texas. He hosts the Connecting Dad Podcast, has authored A Minute of Vision for Men, co-authored Leading from the Second Chair, and serves as a coach and consultant for leader health. You can follow Roger on Twitter @rogerpatterson.

Latest posts by Roger Patterson (see all)
BACK