When God Doesn't Prevent the Fire

On the way to school my inquisitive boy wants to know about fire hydrants. I tell him they allow firefighters to tap into the water supply in case of a fire. Satisfied with my simple answer, he begins to count them and before we reach the school, he’s counted twenty-eight.

What I don’t tell him is how our subdivision—just outside city limits and “rural” by definition—has none such hydrants. I also don’t share how this whole conversation has made me aware of how unprotected I’ve felt in the past.

I’ve spent years of my life believing the bold-faced lie that God failed to protect me. That I was outside His grasp. That He either couldn’t or wouldn’t protect me.How could I believe such lies? Because God did not prevent every fire in my life.

I didn’t understand what I know now, what the fire itself has enabled me to see. When God didn’t prevent the fire, those flames were accomplishing something good in me.

God’s protection is revealed both in what He prevents and what He permits.

I remember how I left the candle burning just the other night. All night long. Found it the next morning still ablaze. I blew it out, thought, “Whew, that was close,” and went on about my day like nothing happened. I don’t think much about the fires God prevents in my life. I tend to focus on the ones He permits. Sometimes, I need to remember that a hydrant doesn’t guarantee security.

I notice a rhythm as we count the fire hydrants on the way to school, evenly spaced and positioned. Like clockwork, I’ve kept in step with that beat called control. I’ve handed over trust to many forms of false security. Relationships, positions, circumstances.

My God—who answers by fire—has used those flames to rid me of every idol I’ve clutched close. He uses the fire to prove how I’ll never be outside His grip. Because He walks through the flames right beside me.

Peter tells believers, “Dear friends, do not be surprised at the fiery ordeal that has come on you to test you, as though something strange were happening to you.” 1 Peter 4:12

And yet, fires do surprise us.

Sometimes, we outright question God’s faithfulness and His protection at the first whiff of smoke. Peter says fires are just part of following Jesus.

Of all people, Simon Peter must have questioned God. Brave, outspoken walk-on-water-Peter swore he’d go straight to his very own death to pledge his allegiance to Christ. But three crows from the rooster confirmed his inability to keep his promise.

Though Peter’s faith would falter, Jesus would not let his faith fail. Jesus’ words to Peter before His death indicate a greater power at work behind the scenes, a power great enough to keep a promise.

“Simon, Simon, Satan has asked to sift all of you as wheat. But I have prayed for you, Simon, that your faith may not fail. And when you have turned back, strengthen your brothers.” Luke 22:31-32

Instead of questioning a God who permits fiery ordeals, let’s lock eyes with the One standing in the flames beside us. Instead of believing the lie that says we’re unprotected, let’s lean in real close and listen to the words of Jesus… and let’s believe Him.

But I have prayed for you, my child, that your faith may not fail. And when you have turned back, strengthen the others.

The next morning, my sleepy-eyed boy stands in his Batman pjs and recalls the bad dream that woke him in the dark. He hadn’t come downstairs to wake me like he usually does. I ask why not.

“You told me to pray anytime something scares me, Mom, so I did,” he says matter-of-factly. I wait for him to go on, but he doesn’t.

“And?” I ask, prompting him to continue.

“And… God was with me, of course,” he replies, then curls up in a blanket on the couch.

Lost in cartoon-land, I doubt he even hears me say, “Of course.” I repeat the words a second time to my own heart, “Of course, He is.” 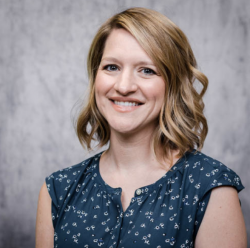 Kelly Sobieski
Kelly is a wife and mom to three. She is passionate about teaching God’s Word and helping people view their stories through a gospel lens. You can read more about her story at carriedbylove.com.

Latest posts by Kelly Sobieski (see all)
BACK